BENGALURU: South African city Cape Town’s severe water shortage – which has made it the first city globally to face Day Zero (when government will shut down water connections for homes and businesses) – has turned the spotlight on other big metros which might have to face this reality in the near term.
A water-starved Bengaluru, it is believed, might make this infamous cut as it is seen as edging towards a crisis of epic proportions. 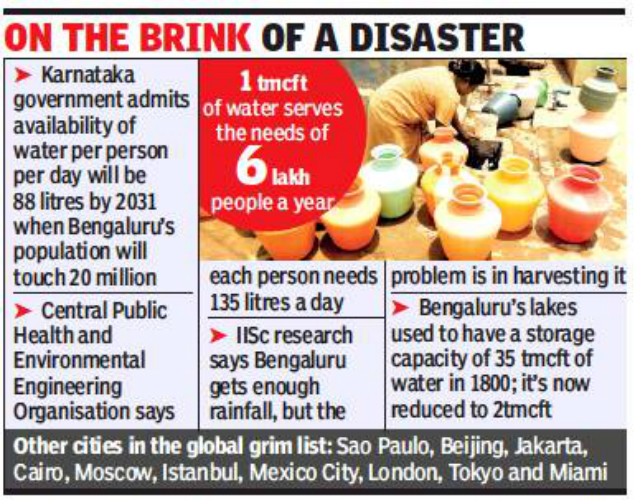 With natural waterbodies becoming victims of concretization and rainwater harvesting being a low priority, the tech capital’s future appears grim in terms of meeting the water requirements of its one-crore-plus people. In fact, alarm bells rang loud to this effect when a BBC report, reportedly based on UN-endorsed projections, listed Bengaluru in the second position after Brazil’s Sao Paulo among the 11 global cities that are likely to run of drinking water.

A trailer of the impending crisis became clear when Bengaluru development minister KJ George admitted that the availability of water per person per day will be 88 litres by 2031 when the city’s population will touch 20 million.

Currently, the norm for domestic water usage is 135 litres per capita per day as prescribed the Central Public Health and Environmental Engineering Organisation.

Though the state government claims it will be spending Rs 5,500 crore by 2023 to increase water availability for Bengaluru to 2,175 million litres per day (MLD) from the current 1,391 MLD, not everyone is enthused. In fact, the 1,391 MLD comprises 678 MLD of Cauvery river water, 672 MLD of groundwater and 41MLD of recycled water.

“Bengaluru has faced a harsh drinking water crisis in the past four summers. A lot could have been learnt and the situation could have been improved. But there is no political determination and bureaucratic vision with regard to water for the city,” a senior bureaucrat told TOI.

Former additional chief secretary IAS officer V Balasubramaian had pointed out the overexploitation of groundwater resources and warned that there will be major crisis by 2025 and people may have to be evacuated.

A recent IISc research by a five-member team led by scientist TV Ramachandrasaid Bengaluru’s water crisis was a result of mismanagement of resources by policymakers. The study stated Bengaluru gets enough rainfall to quench its thirst, but the problem was with harvesting the rainwater.

One thing is for sure – irrespective of bjp or congress, whosoever comes to power, no one will do anything to restore the lakes and its flora and fauna. The nexus between the bbmp, bwssb and the tank… Read MoreAnupam Biswal

Another disturbing fact was on lakes. “Bengaluru’s lakes had a storage capacity of 35 tmcft of water in 1800 and the lakes had been interlinked in such a way that water was available throughout the year. Now, a majority of the lakes have disappeared and the current storage capacity is less than 2 tmcft of water, while the city’s current monthly requirement itself is 1.5 tmcft,” found the above-quoted IISc research. One tmc ft of water is equal to 2,816 crore litres and it can cater to the needs of six lakh people per year.

Irrigation expert Captain Raja Rao said the revitalization of lakes and increase in state’s share of Cauvery river water will help tide over the crisis.

Garbage crisis is a challenge as a minister says George