waste not waste – waste is gold

Waste is Gold – not a nuisance

Waste is Gold in other parts of the world, managing to derive the power, fertilizer, chemicals, and many other subsidiaries for their development and prosperity, not considered a nuisance but an asset. Other parts of the Global states have given priority on waste management including disposal, recycling, converting to consumer items and used in industry, with national and local plans linked to education and “good practices” adopted by the citizen compatible with the master plan of the state. Unfortunately we were not ready to serve our selves and the environment causing disasters to us and “Mother Earth”. We are responsible for the environmental pollution, deforestation, poaching, excavation for  for sand and construction on materials adopting all types of illegal and unlawful destructive methods. Today crisis stage has reached in Sri Lanka on garbage disposal and environmental protection due to the mismanagement and neglect by successive governments. Waste consist of valuable resources, easy to be recycled if planned from “sources” as has been practised in EU, and the West where the citizen is conscious and educated on the importance of safeguarding environment and taken personal and collective measures to save the environment and themselves. For example it is the general practice of the citizen to differentiate the garbage from the “source” to make it easier in recycling with and civic consciousness in the interest of others. It is a civic duty by the citizen to adhere to the norms, directions and practices on waste and duty of the State and definitely not the private sector to ease waste to convert it to gold. Our tragedy is a man-made disaster created by us and should be settled and solved by ourselves by acting collectively and sensibly with no political ideological or other differences or perish without adopting a proper strategy coupled with individual and collective strategy. We must think and act new and differently to win the battle.

It is the responsibility of the State to protect environment and citizen to be civic minded to the health, life and prosperity of the community. It is time the citizen understands the gravity of the situation and realise their contribution to the society. It is true the state has failed to fulfil the trust entrusted on them for a specified period as trustees. expecting to manage economy and waste. Society is stinking with waste, dirt, with full of bribery, nepotism, inefficiency, and corruption which is rampant like air today. In other parts of the world Ministry of Environment is a powerful institution with enormous powers on garbage dispersal, town planning, protection of the environment and taking measures to prevention and protection of natural resources in planning the town and the country. The Minister of Environment should not hide the head in sand and find fault of others , when the responsibility lies on him. In UK, EU and many parts Ministry of Environment is empowered to perform duties freely taking own decisions with no fear or favour. In Sri Lanka successive Ministers of Environment have defaulted including the present Minister who appears not to understand the mandate and responsibility with enormous Executive and Mistrial powers ! We are not in the blame game. We the professionals and concerned citizens are attempting to the state and concerned parties to bring about for a viable solution to the crisis,which is the responsibility of the state and not the private sector/s. still capable of solve provided immediate, drastic, scientific and firm steps are taken devoid of of political interference and of corruption and bribery , still rampant and spread all over.

Despite concerns world too is reaching the crisis on waste sector. World produces 2.12 billion tons of waste out of which 99% is to be disposed in 6 months. United Kingdom went through a difficult period until local authorities took over the responsibility. Incinerators, landfills are to be utilized where necessary with precautions, education and training citizen on civic duties from the source which is prevalent in UK, Europe and USA managing the dump transformed to make gold scientifically with people friendly mega and micro mechanisms. The production of garbage is increasing as shown the gravity in the information given- Sri Lanka 5.10, Trinidad 14.4, Barbados 5.5,St Kites 5.45, Solomon Islands 4.30, Guyana 5.33,New Zealand 3.68,U K 2.58, shows the world trend and the impending danger World citizen is facing the same crisis shows that we are not alone in the crisis. They have long and short people friendly solutions approved and followed by the people. But unfortunately we are lagging behind unplanned and unprepared due to our own negligence, indifference and inefficiency coupled with corruption in all sectors. It is now time for us to pull our socks and enter the marathon of scientific waste dispersal with the help of our local and international scientists and the expatriate community who too will be benefited from the natural resource we have not made use of so far. Methods of land-filling was traditional and now outdated due to health environmental hazards , shortage of lands and protest of environment groups. But we have to depend on landfill for few more years until proper and scientific methods are adopted. Daily output of the waste in western province with 30% of the population of the country which produces 60% of the national bulk garbage is now followed by all other provinces in the volcano gradually erupting slowly and steadily. The state has an uphill task in convincing and educating the citizen on the future plan after having come clean to prove the politician/state is genuine in finding the solution and their perks, excessive expenditure, lavish life style is to be controlled to get back the lost confidence. Education the public and a proper plan and National Plan on waste disposal, must be followed with National Plans for Trade, Foreign Policy, agricultures, Land are other volcanoes about to erupt if no steps are taken to address soon. 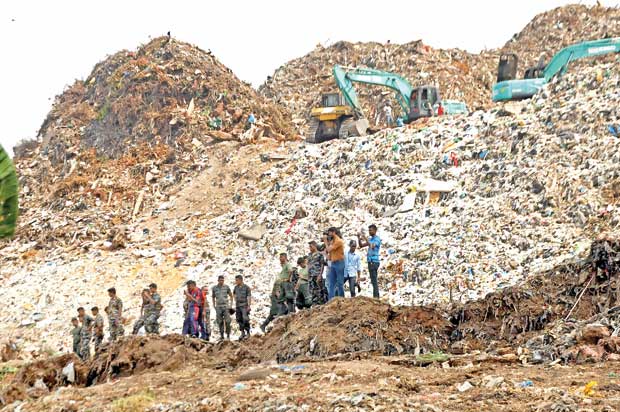 “Success stories of Singapore, Hong Kong, and Israel – leaders on Innovations are ready to help us”

We should not be shy or ashamed to seek advice and follow success stories of other countries. Apart from the large states small but developed and industrialized countries such as Singapore, Hong Kong, Malaysia, Latin American and small African countries have success stories in the management of garbage successfully with various kinds of methods, but basically arising from educating the masses to be civic minded /i conscious. It is advantageous to learn from Israel – a tiny nation of 1/3rd of the size of our country – but a world nuclear power, with few natural resources other than human resources, and world leaders on agriculture, innovations and arms/defense industry with no water 70 years ago, now self-sufficient and even selling water to neighbour has tons of waste managed beatifically with recycling methods, especially desalination of water from sea, taping ground water, and recycling with 4.2 million households,12000tons of municipal waste every person responsible in making 1.9 kg of waste. They are great innovators and an exemplary nation succeeded in all sectors including transforming waste to gold. We have excellent and cordial relations and Israelis are ever ready to help Sri Lanka having assisted us with China and Pakistan for us to win the war when the entire world was turning the back to us.

There is definitely no quick solution to this complicated issue, unless alternate landfills are identified to be used few years, in remote locations with proper study and research on environment with prepared ground basins protected with thick underground protective layer/s, and make arrangements to drain contaminated water and waste material whilst pumping out methane and by products scientifically for reuse. Methane that produces naturally to be used commercially carefully and scientifically. It is also necessary to win the citizen over that viable and permanent solution/s is assured and the landfills are temporary. Citizen is to be advised and educated. In Israel the young Sri Lankan innovator from “Gambol” who invented the wonderful incinerator would have been taken over by the State as an SME giving full assistance until his innovation is world recognized. Surabaya’s proposals are to be used only as a temporary measure/s of landfill, but with precautions on environmental issues. Long term programmes should be the targeted with average and micro programs and the citizen to be advised and educated to create mini- incinerators and to give away only the hard garbage with incentives as in Germany. There should be a long plan to avoid using nonperishable items and encourage the consumer to use environmentally friendly materials such as paper which is available in abundance. There is a proposition to set up a new institution to waste despite number institutions including the local authorities spread country wide led by Municipal Councils with enormous funds and power most of which are inactive, politicized and ineffective with the lead Municipal Colombo. Best option is to make use of the Environmental Authority by adding/giving additional powers as the lead institution to operate with other institutions already functioning. It is suggested to incorporate on 10(1) take any stepson waste disposal, recycling,management of waste through the Authority, or other institutions”.
Same duty is carried out by many institutions led by local authorities. Politician should set an example being simple and not greedy for vehicles and material benefits, with all parties and groups agree to work together on this issue in practices austerity measures and scientific directions as happening in the west and Israel with rigorously implemented rules and regulations. Then the citizen will voluntarily follow the directions an advice provided if it is done genuinely carefully and scientifically. Let us get together to solve the crisis.