BENGALURU: Air quality in 11 cities and towns in Karnatakahas been deteriorating, thanks to the increasing number of vehicles and unscientific waste management. 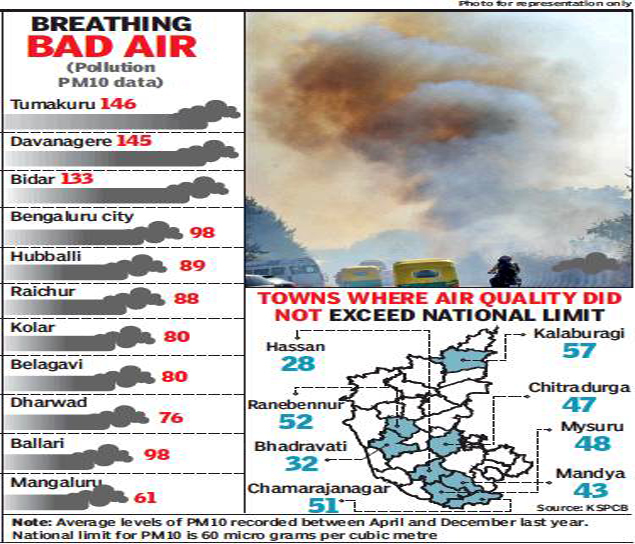 KSPCB has been monitoring air quality at 21 places in these 19 cities and towns. The latest data is the average level measured between April and December last year, according to the report presented by minister for forest, ecology and environment B Ramanath Rai recently in the legislative assembly.

Air quality in eight cities and towns in the state, including Kalaburagi, Ranebennur, Chamarajanagar, Mysuru, Bandravati, Mandya and Hassan, is well within the national permissible limit. “Vehicular emission is the main reason, followed by industrial emission, road dust and burning of garbage. Neither Bengaluru nor the other towns have followed mitigation measures suggested by us over the years. The increasing levels of bad air could pose severe health risks to people in these towns, especially for children and the aged,” a KSPCB official said.
Environmentalist K S Naveen said the pollution control board is a toothless body and most of its recommendations to mitigate air pollution remain on paper.
“Unless, the state government is serious about measures such as imposing curbs on vehicle registration, proper road infrastructure and stringent steps to ensure industries don’t violate norms, nothing much can be expected,” he added.
Share
previous post